Destiny might be the biggest video game of ending up 2014. So why is it garnering so much attention and is it worth preordering? We list out the top five reasons to pre-purchase Destiny right now rather than waiting to buy it at launch or a later time. 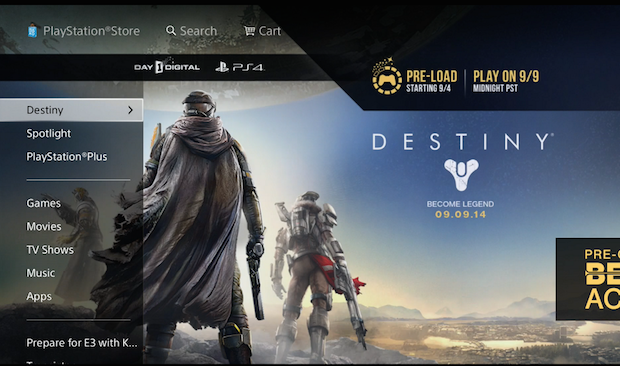 Like other popular videogames, Destiny includes a bonus that rewards gamers who preordered early. In this case, they will be getting early access to the Vanguard Gear, Player Emblem and Weapons. From the wording, the same items may be available for those who did not reserve the product. However, there could be a possibility that you could pay to acquire the same Vanguard Gear, Player Emblem and Weapons down the road. Preordering should eliminate any questions about the availability and price of the bonus.

Some early indicators are showing that Destiny should be one of the most, if not the most, talked about videogames coming out in 2014. A massive amount of gamers participated in the closed alpha, close beta and open beta for all four systems. Not to mention that the Ghost and Limited Editions swiftly sold out hours after they were announced.

Last but not least, the Glacier White Destiny Playstation 4 bundle remains a hot seller. If you are one of those gamers who like to play the most popular and best games, then Destiny looks like it will be the videogame to beat for 2014.

So how well will Destiny review? Based on the Alpha and Beta tests, the reception has been overwhelming positive so far. The only real concern is the size of the videogame. Bungie announced each planet only has one area even though they also stated that it is the biggest game they have ever created. Even if you take size into account, Destiny should have plenty of replay value thanks to its competitive multiplayer that fits in nicely with the campaign and cooperative elements.

Speaking of the campaign, Bungie confirmed that gamers can solo their way through all of the main missions. Nevertheless, the main selling point in the videogame is being able to connect and team up with others to take on missions. There is no better time to play a multiplayer-focused game than at launch since all the players are just starting out (and the multiplayer beta data won’t carry over). The community should be more helpful in the beginning as everyone are starting out as noobies.

Moreover, you won’t be dominated by more experience players, especially those who are jerks, when starting out. On the other hand, you can also get a head start on gamers who wait until much later to purchase the same game. If you are a competitive person, preordering Destiny should help you get a leg up on later arrivers.

The best reason to preorder, or just buy, Destiny is the studio behind its development. Bungie almost single-handedly saved the Xbox with Halo: Combat Evolved and Halo 2. After a strong partnership with Microsoft, they decided to become independent in 2012. As we already stated, Destiny is the biggest videogame yet from Bungie. Given their excellent track record, Bungie fans (and even detractors) should be in for a special treat.

Destiny is available starting on the 9th of September. It is being presented as a Playstation 4 game even though it also releasing on the Xbox One, Xbox 360 and Playstation 3 on the same day. If you want get best experience of Destiny, Destiny-Store.com is your best choice to buy cheap Destiny Glimmer and Destiny Power leveling.