A good choice for those looking for something a bit different from the space marine paradigm, Warlocks are heavy damage dealers who, while lightly armoured, are tough to kill thanks to various regenerative properties. Still, you’re made of glass, so if you intend to play a Warlock be warned that you’ll need to keep your distance, stick to cover, and spam magic. The Warlock should take advantage of openings created by other classes to unleash their powerful abilities, and avoid the frontlines. 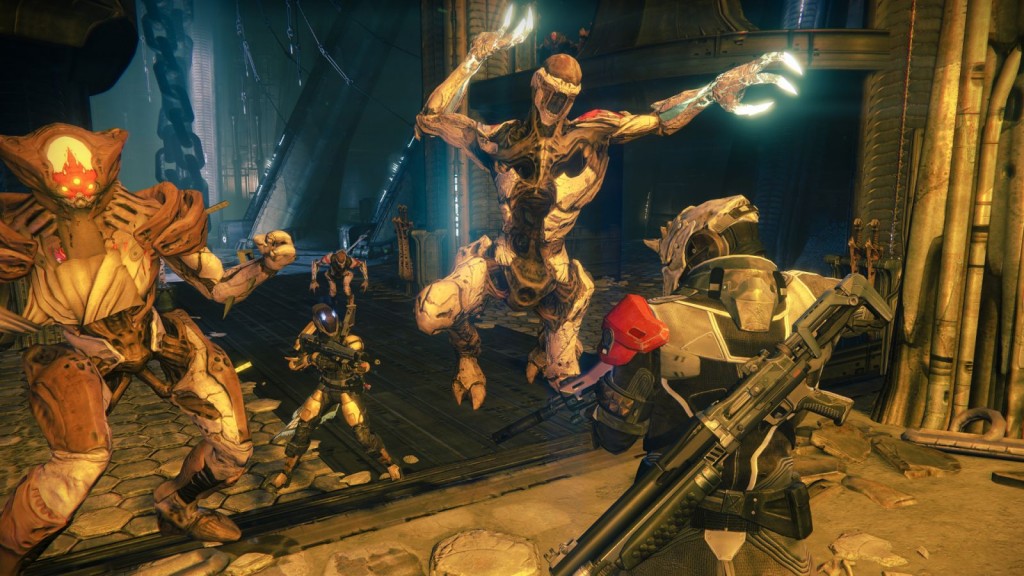 The Warlock’s double jump, Glide, isn’t super buoyant but allows for quite a lot of air time and travel distance. When fully upgraded, it is replaced by a short distance teleport. I hope I don’t need to explain how useful that could be, perhaps for closing the gap to melee.

The most spectacular regular attack, the Warlock’s melee involves a blast of void energy delivered with the palm of the hand. The special melee reduces the cooldown on grenades, and can be upgraded to increase movement speed on kills, restore health and reduce the cooldown on your super.

The super can be tricky to aim, as the Warlock leaps into the air and hurls a bolt of energy at the enemy; if you’re too close, you’ll likely miss completely as the enemy dodges around you. It’s an area of effect attack, but its upgrades are different to the Titan’s attack: at full power, the super splits into three projectiles, travels a long way at high speed, and adds persistent damage while trapping enemies within its field.

The Warlock’s grenade does persistent damage and traps enemies in its field, but it’s easy to aim and takes effect on first impact. When upgraded, it will produce child grenades to lay down a carpet of damage, and at full power the child munitions will seek enemies.

Speed is the first bonus of the Warlock class foci, but you can also increase super, grenade and special melee range and duration; have your super track enemies; and as the piece de resistance, have enemies killed by your powers explode, dealing damage to nearby comrades.